One is silver and the other gold.

Ready or not, the holidays are here. Time to finish up the shopping and the wrapping. Time to deck the halls and trim the tree. But it’s also a great time of year to pause and remember what is most important as you go about your busy day, like spending time with the ones we love or spreading some holiday cheer to a new friend. This holiday season, Elfster is pleased to be connecting thousands of friends, old and new, in festive worldwide exchanges.

Several of these large, international exchanges are being hosted by national sororities, which start with a common bond of sisterhood, but they aren’t just on a college campus anymore thanks to the magic of Elfster’s online exchanges.

Stephanie Martin is a sister in the Delta Gamma sorority and organizer of the “Unofficial Delta Gamma Ornament Exchange,” which for the fourth year in a row, offers the group “an opportunity to celebrate the holidays with sisters across the globe.” 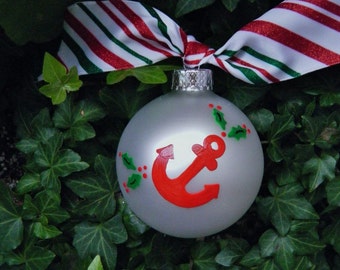 According to Stephanie, “Delta Gamma fosters high ideals of friendship, promotes educational and cultural interests, creates a true sense of social responsibility, and develops the best qualities of character in our members. The Fraternity’s mission is to ‘Do Good’ in all aspects of life. There are more than 230,000 initiated members across the globe, with 146 collegiate chapters in the U.S. and Canada, and more than 220 alumnae groups in North America and Europe.”

“The DG symbol is the anchor, a hugely popular icon worldwide, so many sisters already collect anchor ornaments for the holidays,” she explains. “The DG mascot is the ‘Hannah’ doll. The original Hannah has blonde hair and pigtails, but most members now refer to a more ‘Raggedy Ann’ type doll when they are talking about Hannah, which is another popular ornament.”

One of Stephanie’s favorite Delta Gamma ornaments was created by the Fraternity jeweler and features their three founders hanging ornaments on a Christmas tree together.

“Most sisters who participate choose ornaments with Fraternity themes,” Stephanie says. “The anchor is the ancient symbol for hope, so in addition to anchors and ‘Hannah’ dolls, the word ‘hope’ is another popular ornament theme for us. Our official flower is a cream-colored rose, so we see a lot of those as well. Our national philanthropy is ‘Service for Sight,’ and Delta Gammas do a lot of work each year to serve and raise money for the blind and visually impaired through the Delta Gamma Foundation. As a result, we’ve also seen some really creative ornaments that feature the word ‘hope’ spelled in Braille in rhinestones. Some sisters do prefer to send a traditional Christmas-themed ornament, however, while others choose something representing their locale or college. Many purchase ornaments in stores and online, and some make creations of their own.”

She says, “the exchange has become a way for us to share our love and pride for Delta Gamma while exchanging treasures that mean a lot to us. It is especially fun to see the items sisters find from all over the world. The exchange is open to collegiate and alumnae members, but the large majority of participants are alumnae. My hope is that the exchange brings to each participant a renewed feeling of sisterhood, continued love for the Fraternity, and goodwill for the holiday season.” This year, the exchange boasts 410 participants and is experiencing great growth each year.

“The exchange is considered to be a secret until a sister receives her ornament,” Stephanie explains, “then she should receive a note of introduction from her secret Santa. The members love the opportunity to “meet” new DG sisters from all over, and many stay in touch with each other after the event.”

“The exchange would not be possible without the help of Elfster,” she adds. “With so many participants, Elfster makes it a breeze to register and retain member contact information, pair up exchange partners, and track the shipment and receipt of gifts. Our sisters also enjoy gushing over their ornaments by posting photos along with notes of thanks. Elfster takes a lot of the work out of the event, so we can concentrate on having fun. We would not be able to manage an exchange of this size on our own without the help of Elfster.”

And Elfster is so glad to be a part of this group’s “much-anticipated holiday tradition.”

Another large group spreading glad tidings this season is the Chi Omega sorority, which is hosting its “7th Annual Chi Omega Owl Ornament Exchange.”  Since the Chi Omega mascot is the owl, the ornaments exchanged by the group are exclusively owls. The first exchange for this group started as an exchange between several bridesmaids as a way to stay in touch a few months after a wedding, who all happened to be Chi Omega sisters, and the rest is history.

According to exchange organizer Amanda Weir, “Chi Omega was founded in 1895 at the University of Arkansas. It’s the largest women’s fraternal organization in the world with over 330,000 initiates. We just completed our seventh exchange with 465 participants.”

Amanda says the worldwide exchange group is made up of both collegians and alumnae. “I thought the exchange would be a fun sort of sisterhood event,” she says. “It’s fun to get matched with someone you would have probably never known. Most people add something special about themselves and their experience with ChiO.”

“Before using Elfster, participants would email me their addresses and I would email them back with their match,” she explains. “One year we had almost 1,000 participants, so matching by hand was tedious! One of the alumnae suggested Elfster and it’s been a lot easier. I also don’t have to worry about missing someone or making a mistake with pairing.”

“I think it makes it more fun for me and the participants,” Amanda adds. “It’s less stressful for me since I am not manually matching participants. I think once participants get signed up, they like knowing when they can expect to receive their match. Before they would get their match when I had time to match them.”

“I plan to continue to use Elfster in the future and hopefully it will grow every year,” says Amanda. And the elves look forward to seeing all these adorable owl ornaments again next year!

And speaking of large, worldwide exchanges, the elves at Elfster are thrilled to be hosting several holiday exchanges designed to bring together Elfster users and allow them the opportunity to develop a friendship with someone they may never have known. Elfster’s Meet and Gift exchanges pair strangers from anywhere in the world with another person, who will also send something to them. This holiday season, the hugely-popular Holiday Card exchange will allow over 1,500 participants to send a greeting to a new friend just to spread some cheer. The Deck the Halls and Holiday Treats invitation-only exchanges hosted this season by Elfster are also a huge success, allowing those who have participated in a past Meet and Gift exchange to continue to use the site to make new friends.

Are you a part of a large group using Elfster to spread some cheer this holiday season? We would love to hear how your group is using Elfster, too. You can reach us via Facebook here. Tweet us

Love is in the air at Elfster and the elves are so excited to play Cupid this Valentine’s Day! We’ve got dozens of LOVE-ly gifts to add to your Elfster Wishlist to let your sweetheart [read more]